No Dream Too Big: The Jarrett Bay 110′ Sportfish Yacht Concept

On The Drawing Board

Fresh on the coattails of launching their largest and most advanced custom build to date, Jarrett Bay never stops looking forward to what could be next. Even with a full lineup of 5 hulls under construction and at least one more on the immediate horizon, our engineers and draftsmen have been busy dreaming up another monster build for Jarrett Bay: a 110′ sportfish and explorer superyacht.

The idea of a sportfish superyacht is definitely not a new one. So much so that different terms such as yachtfisher have been used to describe these boats. However, there are very few in this class that can match the striking profile and perfect proportions of the penned Jarrett Bay 110, and even those elite few can’t match the remarkable seaworthiness and performance a Jarrett Bay is so well-known for. Enclosed bridge or open bridge, there is no denying the beauty of this latest design.

Although Jarrett Bay has yet to build a boat with an enclosed bridge, we have witnessed an increased interest in them recently, especially at the larger sizes. The 110′ would be the first hull by Jarrett Bay to include both an enclosed bridge and open “sky bridge.” While the 110′ would feel right at home dominating the best billfish spots on the planet, she is equally equipped and designed for exploration. When exploring the far reaches of the globe, most superyacht owners and captains opt for an enclosed bridge for year-round comfort and safety in almost any climate.

The Details are in the Design

This yacht design has attempted to include every amenity and creature comfort an owner could ever think of. The common requests will be available, including Seakeeper Gyro stabilization, whole boat control systems, unmatched electronics, navigation and A/V systems plus seawater desalination systems. However, there are thoughtful extras including the breakfast bar and common area centrally located below with the guest cabins, plus a third generator that provides for an ultra-quiet sleep mode.

At the heart of her design is Jarrett Bay’s tried and true cold-molded hull modernized with the latest techniques in advanced composites learned from the carbon fiber-rich construction of the Jarrett Bay 90. Although her proportions are staggering, weight is kept in check with the use of advanced materials and composites and her draft remains under the 6′ mark thanks to the precise placement of tankage and vital equipment, including the powerful MTU Series 4000 engines and the 5,900 gallons of fuel that would feed them.

There’s no question that the crew of a renowned sportfishing team works their butts off day in and day out. And when it’s tournament time, the work doubles. The Jarrett Bay 110 is every bit a hardcore fishing machine like every Jarrett Bay built to date, but her design (thanks in part to her impressive proportions) lends a hand to the hard-working crew. Preliminary designs for this theoretical yacht includes a tender and toy garage for storing PWC’s, SUP’s, Kayaks and even a flats boat and motorcycles for exploring remote islands – all tucked away out of the elements in the foredeck, making for a more chamois-free maintenance program for the crew.

The first interior designs of this concept include a full professional galley with complete appliance suite, including a double wall oven and plenty of chilled and frozen storage. A huge pantry accomodates the massive range this boat can travel on her 5,900-gallon fuel supply. There’s also a separate breakfast bar amidship in the lower layout, providing quick bites for the guests anytime. Crew quarters below the mezzanine provide berths, a galley and space for lounging. Of course, being fully-custom the owner can opt for any interior arrangement they desire – if you can dream it, our elite team of in-house engineers, designers and craftsmen can make it a reality.

The last two decades have experienced enormous leaps in marine engine technology on all fronts. Power to weight ratios and power to displacement ratios have increased, while emissions have subsided. Credit the modern marvel of advanced electronics and computers. Now, horsepower and powerband are not dictated by displacement and dumping more fuel in each cylinder, but rather by tweaks and improvements to the software that controls nearly every operating parameter of the modern high horsepower marine diesel engine. The advancement in electronics has also led to precise machining of critical components such as injectors, valves and turbochargers. Extremely tight tolerances and advanced designs of these components has lead to greater efficiency and remarkable power output without sacrificing emissions or increasing displacement.

Recently though, it seems engine technology has hit a plateau. Horsepower gains in the triple digits from basic updates of a legacy engine have not been a part of headlines for a few years now. Granted, big 12 cylinder engines from the top manufacturers like MAN, Cat and MTU knocking on the door of 2,000 horsepower (and MTU’s legendary 16V-2000 M96L producing 2,600 horsepower) are incredible feats of engineering, but owners want their sportfishing yachts stretched without sacrificing speed.

Ten years ago, 70′ was a massive boat and engine technology of the day could propel those behemoths to 40 knots. Fast forward to today and nearly every elite boat builder has been asked to build a boat that exceeds 90′ in length. While it may seem that engine performance has been tapped out, the builders of these massive yachts just need to broaden their horizons. MTU’s global marine engine offering is staggering, ranging from 8 to 20 cylinder configurations, and offering multiple engine block sizes including Series 2000, 4000, 8000 and 1163. These engines, while larger in every dimension to the commonly used Series 2000s, produce incredible horsepower ratings from 3,000 to over 12,000 bhp. Jarrett Bay’s 110 foot concept would seek to apply the increased power of MTU Series 4000 engines. Being a fully-custom boat builder, Jarrett Bay is ready to leverage these impressive engine offerings, matching them with the perfectly tuned hull design and next-generation weight-savings techniques to achieve the top speeds our owners and captains are longing to achieve. 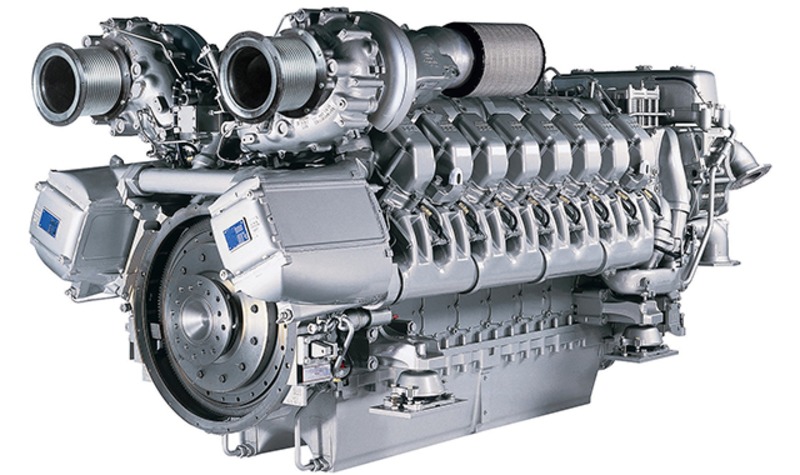