In this final leg of a 12 part series, Randy Ramsey reflects on the most influential people to contribute to Jarrett Bay’s success over the last 25 years:

For the past 11 months it has been a pleasure to share some of the stories about our first 25 years and the many people who have helped to mold the company and contributed to our success. For the 12th and final installment of the series I think it would be appropriate to write about what started all the excitement 25 years ago: hull number 1 “Sensation”. 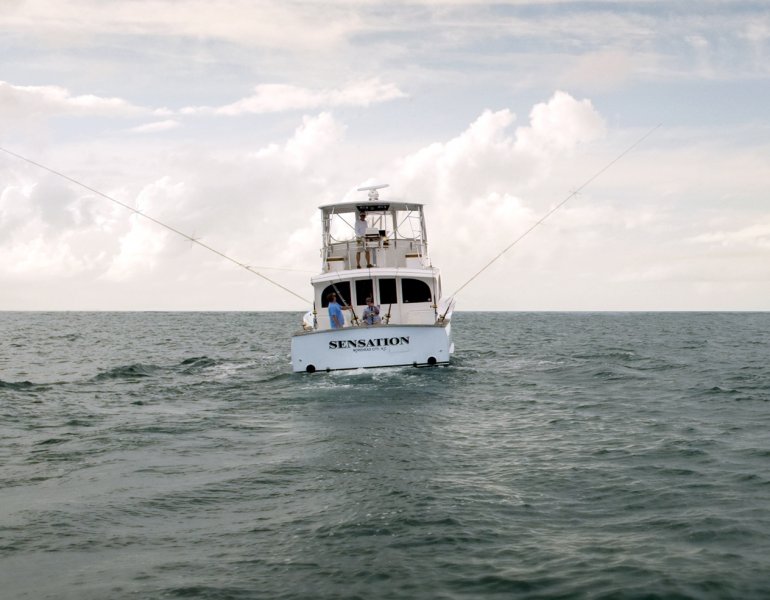 Most people see her as a charter boat operating on the Morehead City waterfront where she and her crew are considered one of the top boats, but very few people know her story and how she changed our lives. When we started “Sensation” we had a goal to build a boat that would be timeless and to use methods that would ensure her success. As we started her construction we had plenty of visitors who followed our progress with varied interest and opinions, many of which were not particularly flattering. In the end, her name signified the fact we felt she was special, and history has proved she helped to change boat building in our region. While I know I am biased, I believe that she became a bellwether for sportfishing boats built after her along the central North Carolina coast.

In 1986, typical charter fishing boats in our area averaged 45 feet or so and the 53’ “Sensation” was the largest 6 passenger boat to enter the local fleet at the time. The design was patterned after the boats Omie Tillett helped to pioneer, with exaggerated flare, tumblehome, and crown. She was one of the first boats to have been built exclusively using epoxy glue for the planking and all aspects of construction, including laying the fiberglass cloth which was unheard of at the time. We took extra time and care to ensure we faired the hull and cabin and then painted her with Awlgrip polyurethane paint. This was also a rarity at the time of her launch, since most boats were still being painted with oil-based flat white paint. As I look back at the way she was built, it is hard for me to imagine that after her completion these methods would still be used extensively in almost every sportfishing boat built in our region.

As we started to fish “Sensation” we were treated to the wonders of Carolina boats and all they had to offer in the ocean for the crews and our passengers. “Sensation” not only led to many more boats for our company to build, she also took her place as a boat that helped shape our industry – something I would have never dreamed of happening. 25 years later, “Sensation” still fishes almost every day and even though she has had several owners and many different engines, she is still helping to set the standard and carrying on the tradition of Carolina-built boats.