Sea Trials Underway for the Most Advanced Sportfish Boat Ever Built

Spanning 90 feet and representing the next evolution in offshore battlewagon performance and comfort, the Jarrett Bay Boatworks custom sportfish hull 62 Jaruco has begun sea trials with engine and mechanical partners. This revolutionary cold-molded hull with carbon fiber stringer and bulkhead designs is powered by twin 2600hp MTU 16V 2000 M96Ls, spec’d by Western Branch Diesel. Thanks to the owner’s relentless interest in the engineering process, the early planning stages for this landmark build included computer engineered and high-speed tank tests of the hull and running gear performed at The Netherlands’ Maritime Research Institute (MARIN).

To ensure their largest build to date will churn the numbers and safely handle the most intense offshore angling campaigns, extensive attention was given to material science and propulsion physics. Formerly known as “Project Ireland,” more R&D was performed on Jaruco than any other Jarrett Bay, and quite probably any and all sportfish boats, to ever come before her. Virtual tank testing, actual in-water tank testing, a detailed weight study, both initial and during the build, as well as composite testing are notable aspects of the Jarrett Bay 90’s design process as it relates to speed. Built to ABS specifications to withstand 8-ft seas at 50 knots, the Jarrett Bay 90 has been designed to tackle the most remote fisheries of the world in ultimate style. By carrying 4,400 gallons of fuel, she will have the range and speed to travel anywhere – fast. 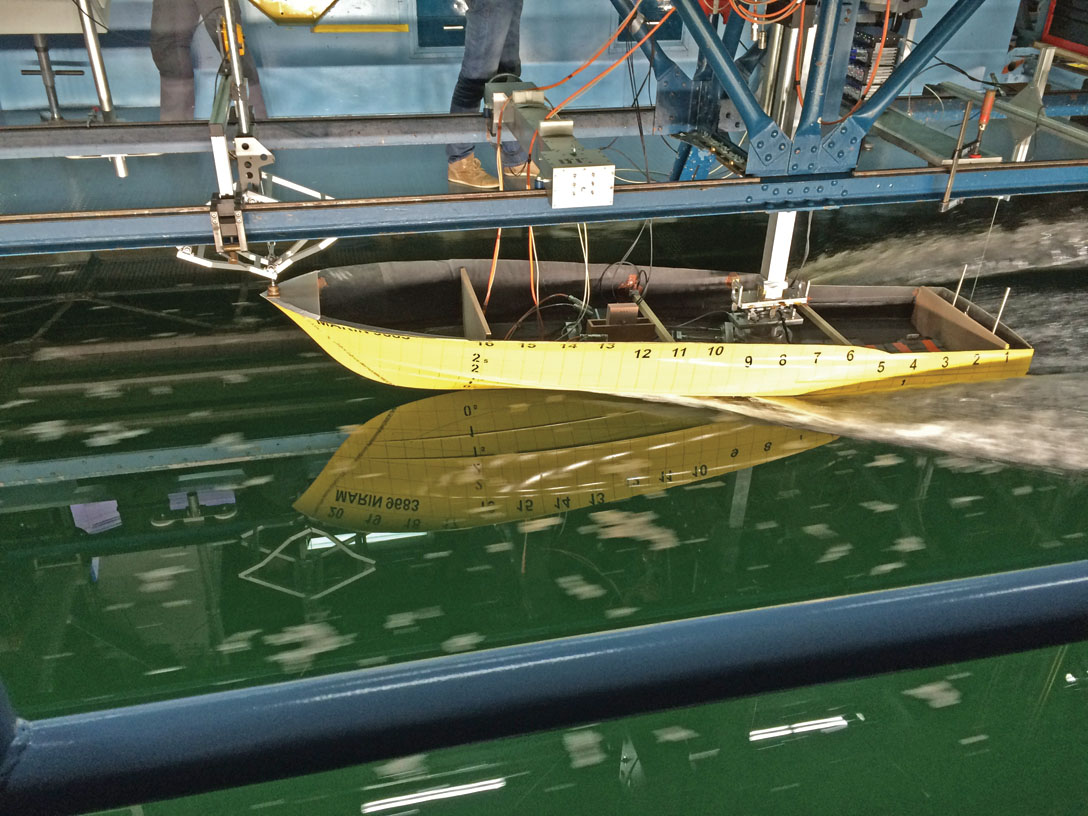 To engineer the ideal speed to weight ratio without sacrificing safety considerations, the Jarrett Bay 90 uses cutting-edge materials in places that you wouldn’t normally see on a sportfish. The cabin, foredeck, salon floor, mezzanine, top deck, bridge, wake-adapted rudders, and many other parts have been upgraded to a proprietary carbon fiber lamination matrix over a Diab core developed specifically by the Jarrett Bay 90’s engineering team. Additionally, hull 62’s Palm Beach Towers hardtop, standing platform and buggy top are all comprised of carbon fiber.

The use of ultra-modern, lightweight materials doesn’t stop with carbon fiber. Titanium has been used in several large applications, including the massive 30-foot propeller shafts, which saves more than a thousand pounds over conventional stainless-steel shafts. Additional ultra-lightweight techniques applied by Bella Terra Interior Solutions on Gulfstream jets can now also be found on the Jaruco’s luxurious stone countertops and backsplashes. 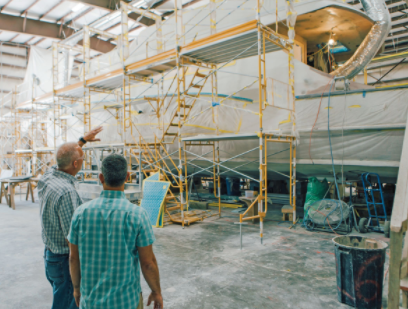 Company President Randy Ramsey commented, “This is one of the most ambitious custom sportfish boats ever built with the mission to elevate our world-class craftsmanship, performance and structural integrity to levels yet to be achieved by others. Everyone involved in the R&D, testing and construction of Hull 62 is excited to see her transition from “a project” to the incomparable sportfishing yacht we’ve been engineering for more than three years.” Owner’s agent and Bluewater Yacht Sales professional, John D Riggs, added “Walking along the full length of Jaruco takes me almost half a minute, and in doing so I can’t help but think that you’re passing by seas of hidden numbers… a 465 square foot salon level, a 450 square foot bridge, 140’ of toe rail, and nearly 100 overhead lighting fixtures. Those are the little numbers, and they pale in comparison to the tremendous amount of man hours invested into research, development and fabrication thus far. It’s been an absolute honor to work with everyone involved with this multi-dimensional project.”

Further ensuring the Jarrett Bay 90’s handling and signature ride will be as nimble and comfortable as on her smaller sisterships, the battery of sea trials currently taking place include factory representatives on deck to test Jaruco’s many cutting-edge systems. This includes an elaborate port, starboard and mid interceptor stabilization and trim control system by Humphree, and the roll-eliminating ability of the Seakeeper 35, housed in a custom-built carbon fiber torque cage. Carolina and New England Bow Thruster have overseen the installation and initial testing of the Side Power SH550 hydraulic bow thruster which features counter-rotating propellers that provide optimal thrust at a good performance ratio in a minimal tunnel diameter. 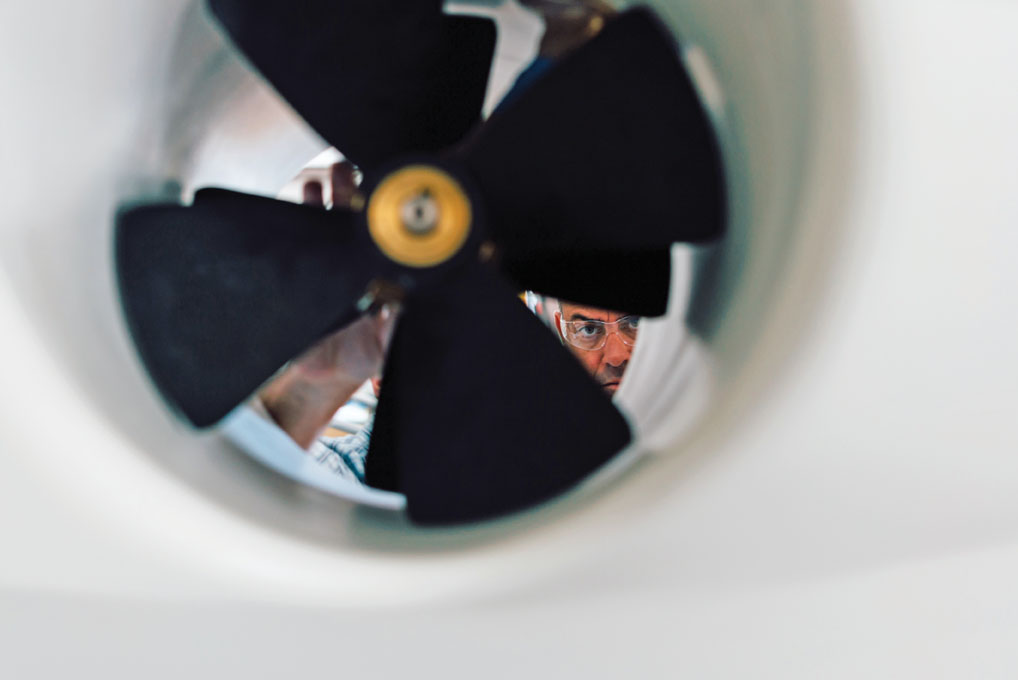 Following suit with the “Most Advanced Sportfish Ever Built” theme, the Jarrett Bay 90’s navigation and communication systems designed and installed by Atlantic Marine Electronics are also being tested to provide peace of mind assurances at sea. Amid a myriad of the latest electronics found on the Jaruco, most notably her crew can not only find seabirds in adverse weather conditions with its Furuno 60kW S-Band Radar with 12 foot array, but also stay connected with family and business back home while hooked up in Tanzania via a KVH Fleet redundant SatCom system bundled with Iridium Pilot. Illuminating all of this innovation in super bright LED lights is Lumishore’s EOS series thru-hull color change underwater lighting system.

The delivery of sportfishing’s latest beacon of the ultimate in custom construction performance, efficiency and safety is scheduled for Winter 2017/2018. However, attendees to the Fort Lauderdale International Boat Show will be treated to a look inside the Jarrett Bay 90, literally. At Jarrett Bay’s Bahia Mar C-Dock, Slip 313 display, the actual 12’ MARIN model used for the Jarrett Bay 90’s tank testing in The Netherlands will be on display, as well as composite cutaways of Jaruco’s carbon fiber stringers and bow deck, and samples of her space-age counters and exotic wood veneers mounted on lightweight Tricel substrates. In addition to members of Jarrett Bay’s construction team being on-site to break-down all of this technology, the first in a series of “Sportfish Construction Evolution” videos by Lift Films will be running on display monitors. And as a special takeaway, marine artist Steve Goione will be signing special edition concept art posters of the Jarrett Bay 90 throughout the show. For more details on this historic build, please visit the Jarrett Bay 90’s website.